TOBA TEK SINGH – The Centre for Peace and Development Initiatives (CPDI) has expressed its concerns over delay in the announcement of Punjab Provincial Finance Commission (PFC) award .
In a press conference, CPDI district coordinator M Shahid said that the process of devolution of power was incomplete without a formula to share the provincial divisible pool among the local governments. He stated that Punjab Local Government Law was passed in 2013 but there had been no PFC award except for an interim award that was announced in January 2017 and expired in June..He also said that Punjab government showed some movement on the subject by constituting the commission and holding its first meeting in July this year. But since then, there had been no progress for the announcement of PFC award , he said.
The provincial government must fulfill its responsibility by taking concrete steps for immediate announcement of PFC award , he further stressed. He said according to budget calendar the time to initiate budget making process has already arrived and further delay in announcing the award will hamper the process at districts level. It will also adversely affect development planning of the districts, he said.
He further added that Section 112 of the Punjab Local Government Act 2013 requires from the PFC to devise a financial sharing formula between the province and the districts and among the local councils. He urged the provincial government to move swiftly towards announcement of new PFC award for distribution of provincial allocatable amount to local governments.
Referring to the provision under article 140-A of the Constitution of Pakistan, he stated that the idea of Provincial Finance Commission Award was vital for devolution of financial responsibility and authority to elected representatives of local governments as enshrined in the constitution. He demanded the provincial government immediately fulfill its constitutional and legal responsibility by expediting the proceedings of the PFC and announcing the Provincial Finance Commission award without further delay .
He also hoped that the Punjab government would strengthen the local government system by giving them more liberty on the use of their financial share in the provincial divisible pool.

Quetta – A journalist is incomplete without accuracy and impartiality, said Shahzada Zulfiqar President of Quetta Press Club (QPC) on Monday.

QPC President made this statement while addressing the concluding session of a workshop held by Center for Peace and Development Initiatives (CPDI). Shahzada Zulfiqar thanked CPDI for training journalists of Balochistan and urged them to conduct similar training programs in interior Balochistan. 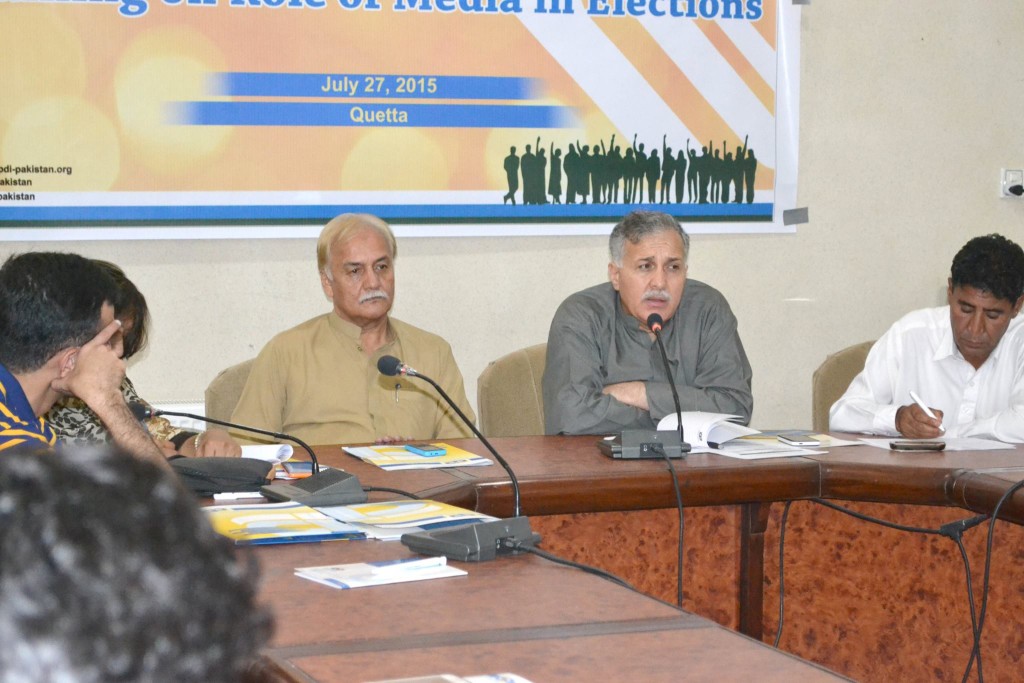 Saleem Shahid, Senior correspondent of Dawn newspaper said that, “A journalist has to be impartial irrespective of his political inclinations.”

CPDI, a research based advocacy group, held a one-day training workshop for journalists of Quetta in QPC, titled “Role of Media in elections.”

Group training exercises were conducted to systematically train the participants on how they can best perform their duties during elections.

Over two dozen journalists participated in the workshop from different newspapers and television channels based in Quetta. Fatima Khan, provincial coordinator of CPDI thanked the participants and announced similar training programs in Lasbela and Loralai.

In the end, participating journalists were awarded certificates by President QPC Shahzada Zulfiqar and Saleem Shahid.

Published in The Balochistan Point on July 27, 2015