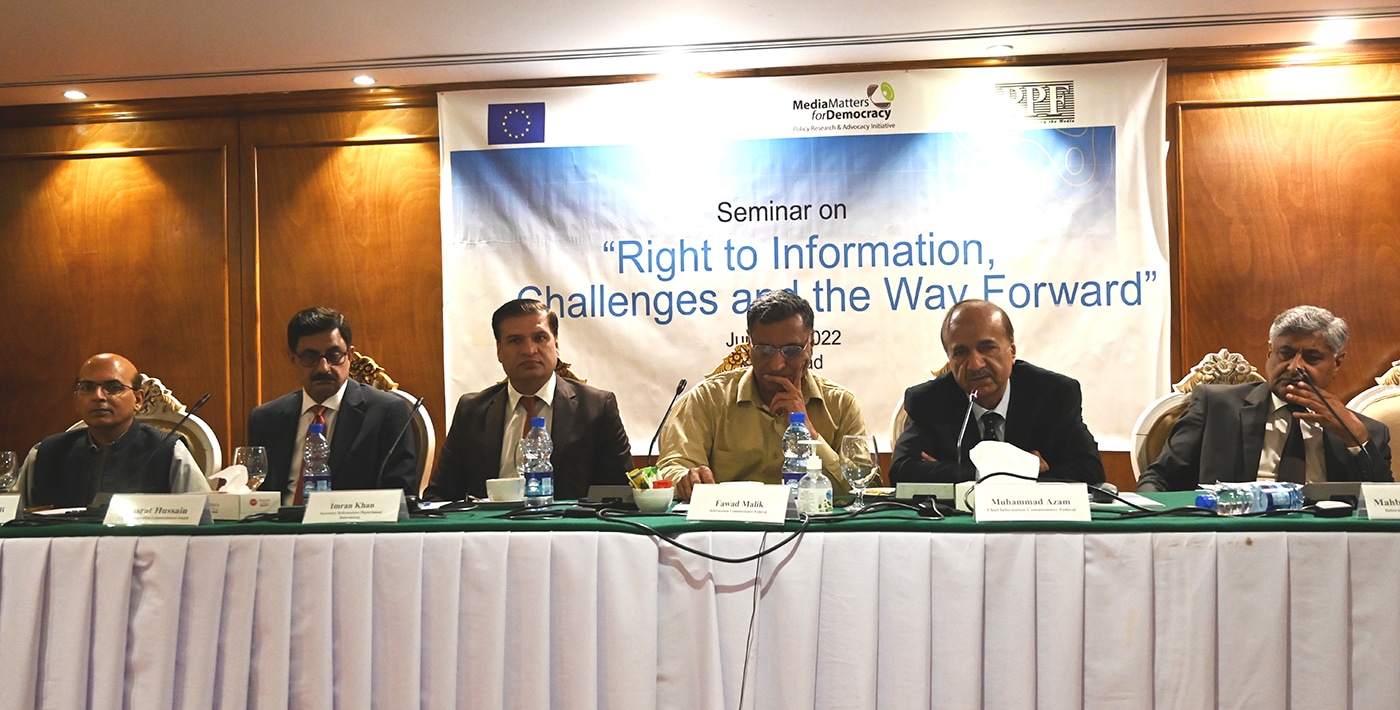 Islamabad: Tuesday – June 22, 20022: Centre for Peace and Development Initiatives (CPDI), in collaboration with Pakistan Information Commission (PIC) organized a one-day seminar on “Right to Information, Challenges and the Way Forward”.  Objective of the seminar is to share findings of RTI assessment report and generate informed debate among stakeholders about the challenges and hurdles posed in the implementation of RTI laws in Pakistan.

Aftab Alam, Consultant, CPDI shared the findings of study titled “Assessment of Right to Information Implementation (Bureaucratic Hurdles)”.  The Study aims to assess the quality of implementation of the RAI Act, 2017; including major impediments i.e administrative loopholes inherited in the system, lack of required resources and ability to digitize the internal reporting and evaluation systems that make PIOs answerable to the head of departments and other bureaucratic hurdles. The study highlights that Pakistan Information Commission is facing serious challenges to implement the Act. These challenges includes administrative, procedural and legal, since its establishment in November 2018.  Moreover, Federal ministries remained sluggish in compliance of statutory obligations under the Act. Most of the public bodies failed to proactively disclose information on their websites as required by section 05 of the RAI Act. Government authorities also showed reluctance in implementation of orders of the PIC.

Mukhtar Ahmad, ED CPDI, said that essence of RTI revolves around online/offline proactive disclosure of information by government departments. He appreciated that RTI laws have been enacted in Provinces and Federal level whereas implementation still remains questionable especially in Sindh and Balochistan. He welcomed the newly appointed information Commissioners in Sindh Information Commission (SIC). He encouraged citizens to use their fundamental right to know to promote transparency and public accountability and inclusiveness of citizens. Mehboob Qadir Shah, Chief of Punjab Information Commission remarked that transparency and meritocracy are the fundamental attributes of developed nations. While highlighting the flaws in system, he said that lack of political commitment is main hurdle in implementation of RTI in Punjab.

Nusrat Hussain, Chief Information Commissioner (SIC) while appreciating his predecessors said that despite of lack of administrative support and resources, 150 complaints were resolved out of the total 165 complaints by SIC. He remarked that, provincial government of Sindh is committed to strengthen SIC for effective implementation of RTI. He added, in the last week, they have received 30 information requests from citizens. Newly Appointed Chief of SIC is determined to improve website of SIC to ensure proactive disclosure of information whereas lack of resources and staff are the main challenges for SIC.

Imran Khan, Secretary Information, Government of Balochistan said Rules under Balochistan RTI Act, 2021 are laid before the Chief Minister Balochistan and will be finalized soon. Establishment of Balochistan Information Commission will be established by December 2022, he added. He reiterated that culture of secrecy, lack of political will, lack of awareness in citizens and bureaucratic hurdles are the challenges in the path of RTI implementation in Balochistan. During the question answer session, the participants were enlightened in detail regarding implementation of RTI laws in Pakistan. At the end, all the participants pledged to continue their joint efforts for the promotion of transparent and accountable RTI regime in Pakistan.

About CPDI: Centre for Peace and Development Initiatives (CPDI) is an independent, non-partisan and a not-for-profit registered civil society organization working on the issues of Development and Peace in Pakistan. The Seminar was held under the Project funded by the European Union titled Civil Society for Independent Media and Expression (CIME).